Goddesses and Asses  (aka #MeToo)

Time Magazine’s person of the year is a group of silence-breakers. It is the #METOO women’s movement that seeks to stop the sexual abuse that has been going on for years. YAY!!!! I am happy that others won’t have to put up with the gropers I have had to for decades. Read on sister if you want to know my stories.

The incidents in my life that stand out the most are:
1982: I didn’t say a word, too stunned and scared when the high school teacher put his hand on my ass.

1983: I was stalked by a tech-nerd classmate at GTE Sylvania who had to make a show of grabbing my ass deeply – into the crack and beyond (the reverse pussy-grab?) in the hallways. It was so demeaning and disgusting. No one said a word, not even me. I finally complained to the teacher who replied. “Yea, I saw that and I thought you wanted it.” I was speechless. Then he did zero. I graduated shortly thereafter.

2012: While saying goodbye to the house party host (and her new boyfriend), he pulled the reverse pussy-grab… I was mortified and hoped no one saw, and ran off to my car. But they all saw. No one said anything, not even my date at the time who said after: ” Yea, I saw it – but I thought you had something going with him.” WTF??

So finally, in 2012 I decided to grow up and stand up for myself. Why did I not do this before? (It was the era of victim blaming, career sabotage, etc. etc.) What luck for me that I had just read the feminist-interpreted fables in “Women Who Run With the Wolves.” I examined all my feelings around groping and got SUPER pissed.

Millennials and younger may wonder why women rarely stood up for themselves. I think it was instilled into us Boomers by our families. Many women’s first assault was by a close male relative/friend who preyed upon their naiveté and threatened retribution. Many girls of the era did not want to rock the family boat and become unloved, or weren’t believed, or simply told to hush. “It is not a big thing.” “Boys will be boys.” “ The man is always right.” Men had the only paycheck and women were second class citizens then, but no more! Four million strong women marched in January 2017 against pussy-grabbing and locker room talk and cads and loss of health choices becoming normalized. Post-march women knew that other women had their back. Lawyer Gloria Allred for one, ask Harvey.

The Women’s March has super-charged two things that are playing out right now: #MeToo and #SheShouldRun (for elected office). And this, my sisters, is ushering in an orgasmagical transformation in society! Stay tuned!

But back to my story. A course correction was overdue for me after I examined why I always became mute when violated and demeaned. Decades of latent anger was to be sprung on the next perp…

2016: While standing next to my husband and saying goodbye from a lovely dinner party for four, the 80-year-old host ground into me and whispered yummy noises in my ear. Yuck. Disgusted. Mortified, his poor wife was standing right there too. Well, thankfully it wasn’t the reverse pussy-grab, but it sprung the trigger and I finally stood up for myself. Most angrily.

Now I have an important ask for YOU: when you see this behavior in the future please say “THAT IS NOT COOL” and call them on it. Don’t be a silent bro-stander. (Kudos to two brave people in the past who have stood up for me, and averted what could have been more than a grab. Thanks!)

Have you got a story? Get it out there – tell your sister, friend, husband or even Facebook. Release that festering gunk and be free. Speak up Goddess and admit #MeToo if it is your truth, as it is for over 40% of women (and a smaller percentage of men). Don’t name names if that is too uncomfortable – simply name the feelings and #METOO. 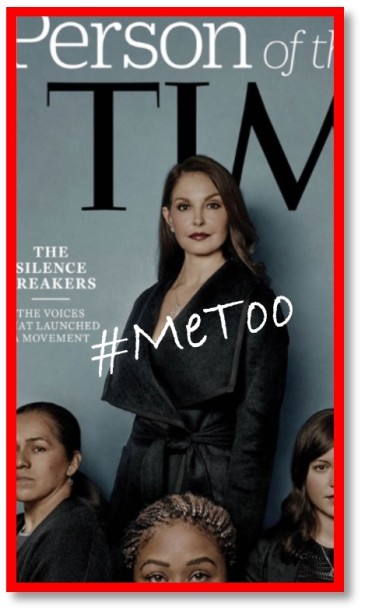 RM Allen is the author of The New Hampshire Goddess Chronicles series, small but effective books on the intersection of spirituality & environmentalism. She continues the small but effective theme in her newest writing project: the Maryvonne Mini-Mystery series, which are about racism and redress. The first book released January 2020: Incident at Exeter Tavern. Second book released September 2020: Incident at Ioka. Both o Amazon/Kindle or Water Street Bookstore. Thanks for your support! View more posts