I Want My Maple Syrup! A Story from the People’s Climate March, NYC 2014

Although I am not a fan of the ridiculously early rise, I found myself safely on one of two 5:30 am buses out Portsmouth, NH, chartered by the Sierra Club of Maine. Anyone could go to join what I heard was to be about 50 thousand people who wanted to march in a peaceful protest in Manhattan with the aim of influencing an upcoming climate conference at the UN. The organizers, Bill McKibben’s 350.org, said it was to be a family-friendly day with at least ten marching bands and plenty of creativity.

Somewhere around Connecticut, a microphone was handed around the bus so all could introduce themselves and say why they were there. Riding the bus with me were the very fun Leftist Marching Band, a marine scientist, a guy building a passive solar house in Newbury and his high school daughters, a woman who rehabs turtles, a NH state rep, a 350NH coordinator and her family, and clusters of folks from the UU churches of Exeter and Portsmouth, the Sierra club and the Appalachian Mountain Club and random others. I had my “Exeter NH Transition Town” sign with me on the bus: ready to represent Exeter townsfolk who are trying big and small ways to reduce their carbon footprint. Why were so many diverse folks there? The common theme I heard was they were doing it for their children, grandchildren, and the earth and its animals and plants.

An hour later our bus was greeted by event volunteers and we quickly disembarked and the bus pulled away. Over 5

00 buses were incoming and it was astonishingly well organized. We all headed to different part of the event staging area: people standing shoulder to shoulder on 8th Avenue along the west side of Central Park from 86th Street down to Columbus Circle. The procession was organized in a two mile line that told a climate story: at the front in section one stood famous people and those impacted most by climate change (environmental justice groups, indigenous, Sandy survivors, etc.,) Section two was “We Can Build the Future” (students, elder, families, labor). Three: “We Have the Solutions” (transition groups, renewables, food & water justice, environmental groups). Four: “We Know Who is Responsible” (anti-corporate campaigns, peace & justice, pipelines & fossils). Five: “The Debate is Over” (Scientists, Interfaith, and more). Six: “To Change Everything, We Need Everybody” (LBGTQ, community groups, cities, states, countries, and more). You can only imagine the slice of American pie that was there.

Oh and did I mention that instead of 50 thousand people, about 300 thousand came! Everyone from hippies blowing conk shells to suits with ponytails, from Hare Krishnas to Friar monks, from babies dressed like bees to oldsters in wheelchairs, from fusion scientists with graphs to Native American Elders in ceremonial dress. Most had very clever signs, props or costumes. No issue that climate has a finger into was left behind; even the Lorax and his Thneeds were represented. I very slowly wound my way through the shoulder to shoulder crowd, past the vegan contingent, the musicians singing and dancing, other groups chanting “this is what democracy looks like,” and many folks just standing and endlessly scrolling on their cell phones. Finally I stopped with my Exeter NH Transition Town sign at the front of section three “We Have the Solutions,” and waited to begin marching. And waited. Waited over an hour in fact because the line was so long that it took an hour for the motion to get up to where I was standing (at the halfway point) before my crowd even began to move. Oh it was hot and humid and close, down in that valley between the skyscraper on one side and the tall trees that line Central Park on the other, but it was very happy and hopeful and very, very well organized.

We had been pre-instructed to do two ritualistic things: one at the beginning and another at the end of the march. At a certain time at the beginning, all would receive a text to begin a moment of silence to remember all the victims of climate changes and to pray/hope for the future. This was a very digital event. Live stream on Twitter of #peoplesclimate was uploading like mad as well as other sites. People were glued to their phones, especially the younger set. What an advantage over the past. I think of protest via digital means a “civil roar” (play on “civil war”), as it seems to me that today’s social media is a very important factor in peaceful political change. I checked mine only sparingly, preferring to observe first-hand. (Leo DiCa

prio and Mark Ruffalo were there?  Where??) As I am middle-aged, I typically use my cell phone mostly to snap pictures.

A commotion behind me turned out to be a tribal elder in ceremonial dress being ushered through the throng towards the front of the parade by a very fun and boisterous contingent of African American boys.  The boys had bull horns and were singing climate raps in a conga line of banners and affirming bodacious women that could have been in the choir at a Baptist church. Just then the moment-of-silence text came. An instant hush fell over the crowd and we all raised our arms to the sky and closed our eyes. At that spiritual moment, I felt all the hair on my arms raise as I listened only to the wind blow through the trees of Central Park with over a quarter of a million other people turned out to protect Mother Earth… you may say I’m a dreamer, but I’m not the only one.

This silence was to be followed by a raucous cheer… and it was bedlam. What fun! Finally we were off and marched five miles; past Radio City Music Hall, through Time Square, and ending at 34th and 11th street, quite close to the entrance to the Lincoln Tunnel. The procession was quite slow and took about three hours, but was very, very well organized. There must have been about ten thousand volunteers to pull off this event, from volunteers on the ground to the people who got the permits and politicians and police. Yes, tons and tons of New York’s finest lined the barricades, keeping the march route and crosswalks clear and letting the tourists cross the road in Times Square every so often. TV crews and professional photographers were everywhere, interviewing everybody. At the very front of the parade had been the UN Secretary General Ban Ki-moon, Al Gore, Bill McKibben, mayors, senators, and many others. (Leo & Mark? Where??) 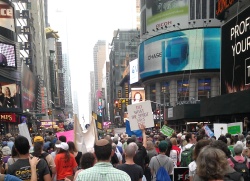 I found this press coverage very heartening to see as I wearily marched along through Times Square, although notably absent were NBC, ABC, and CNN. It is quite extraordinary when 300 thousand people come to town and it doesn’t get shown on the nightly news. You have to ask yourself why.  I remember when Bill McKibben spoke in Exeter at a the We the People Lecture Series at the beginning of his fossil fuel divestment campaign and I was trying to arrange a small room for him to meet the press in before his speech  – and he told me not to worry about it because the press wouldn’t  cover him anyway. (He was right, no press requested to interview him that night even though 400 citizens packed the church to capacity to hear him.)  I remember later on there was still negligible press when he got thousands to form a human ring around the White House, any many high profile folks to be arrested at a sit-in there. I could only watch it live via Twitter.

But now I think the famous “tipping point” has been reached. Why do I say this? Because the very same day of the People’s Climate March the Rockefeller family has announced that it will divest all fossil fuel stocks from their Rockefeller Brothers Fund.  Don’cha know that fossils are the very same thing that made them rich back in the day? According to Reuters on Monday, September 22 between the Rockefellers and other high wealth folks and institutions, 50 billion dollars has been pledged to be divested from fossils over the next five years. Perhaps it is the dawn of a new day.

At the end of the march there was a big party with music, food, water and, thankfully, port-o-potties. I helped a unicorn holding a tambourine get a cup of water at the giant water-monster. I was an early user of the port-o-potties (still ok) and then got in line at a food truck. We in the long food line were heckled by some young vegans who asked us how we could call ourselves environmentalists and still eat meat as it is such a huge contributor to greenhouse gas.  Dang!  What a thing to say to us fellow marchers with our tired feet. In my opinion it doesn’t have to be an all or nothing mind-set. It really doesn’t. Everyone has trade-offs: I still enjoy a burger but I have a very large veggie garden now; I drive a car but it is an economical model and I divested fossils from my portfolio two years ago.  My list goes on and I am sure yours does too. We all do the best we can, and then sometimes we try a little harder and make still more incremental gains. Like today’s march in NYC or like what ordinary folks in Exeter are doing every day.  I think it is great fun to write about what big and small steps people in Exeter are taking and post it to the Exeter NH Transition Town facebook page. (Please like me on Facebook, thanks)

At the end of parade party section near the entrance to the Lincoln Tunnel was the second ritual in which we were asked to participate.  Every marcher was asked to write on a ribbon their name, age, state, and finish this sentence “I don’t want to lose…” and tie it to an art installation that looked like a big banyan tree. The ribbons would form the leaves and roots. After you tied your ribbon you were to then pick off one someone else’s ribbon and take it home. In this way cross-country bonds are formed between marchers. To me it seemed like a virtual “hand binding” ceremony seen at weddings but on a much grander and ethereal scale. The large installation fluttered vibrantly in the fall air, with people milling all around and inside it. If you chose you could come to the microphone in the center and read aloud the ribbon you would take home, then all were to reply “we are with you.” One woman walked to the mike and read her ribbon, written by a woman from New England, which said   “I don’t want to lose… Maple syrup.” The crowd replied…  “we are with you.”

RM Allen is the author of The New Hampshire Goddess Chronicles series, small but effective books on the intersection of spirituality & environmentalism. She continues the small but effective theme in her newest writing project: the Maryvonne Mystery series, which are about racism and redress. The first book released January 2020: Incident at Exeter Tavern. View more posts