Running with the Wolves in 2017
By RM Allen

Election: November, 2016: It was so dark, so why couldn’t I sleep? It was simply too dark to sleep. The darkness had dredged up my past rage about men who grope, men who demean, men who lie. Thankfully I now enjoy and adore wonderful and caring men who inspire me daily. I want to avoid knee-jerk-reaction to the past rage suddenly returned, but am confused as to how to thoughtfully proceed. Suddenly it strikes me to search for wisdom inside one of my favorite books “Women Who Run with the Wolves” (by C. Pinkola-Estes). And there it is, a chapter on rage and forgiveness. The Japanese story of The Crescent Bear, followed by dissection and explanation, is like a magical balm. As I read it from a new perspective, truth illuminates and disinfects the moldering corners of my post-election mind. There is work to do.

.
Solstice: December 21, 2016: The darkest days pass and the light begins to return now. As Pinkola-Estes writes, rage is good and serves a purpose. Consuming rage burns all to ash, but appropriate rage lights a transformative fire and directs your path to “right action.” These days there is a collective rage directing a lot of right actions. Almost four million women are connecting through crowd-source storytelling on Pantsuit Nation. Their stories enrage, sadden, give hope, inspire; The flight attendant calling out the unwanted touch, the feminist dismayed, the caring man on the subway, the female soldier in Iraq, the black mother with tiny son on her breast, the middle-schooler with her Malala report, the singer who lives near the old KKK house and her soulful version of Lennon’s “Imagine”, the nasty woman scientist, the newlywed lesbians, the wild woman and her pre-teen daughter in the hockey game bleachers. Today I read in The Guardian that the ACLU website had crashed from activity and that “Planned Parenthood has received more than 300,000 donations in the six weeks since the election, 40 times its normal rate. Around half the donors were millennials and 70% had never given to the family planning organization before.” Rage is being directed into right action. This is good.

New Year: January 2017: The light grows stronger. Three reasons for hope: (1.) Michelle Obama’s recent “exit” interview with Oprah was a model of how to be simultaneously strong and gracious at this time. (2.) Carefully in the mushroom cloud of fake-news, I am researching and watching the young Ivanka, as she seems to have a bit of the she-wolf in her. Can it be? There is some cause for hope, but I am unsure. Let us see what her reaction is to The Women’s March on January 21st. Which brings me to (3.) Hundreds of thousands of women, families, and church groups will travel with their personal wolf-packs to either the US capital or their own state capital on January 21 to creatively express their insistence on women’s and human rights.

.
My husband will join me, as well as many friends and family as we gather at the Boston Women’s March, and in the years ahead, to continue our work to create a more gracious world for future generations. With a hopeful heart, I will carry with me an ultrasound photo of my unborn grandson. My personal wolf-pack will be there to “make our voice heard” …will yours? 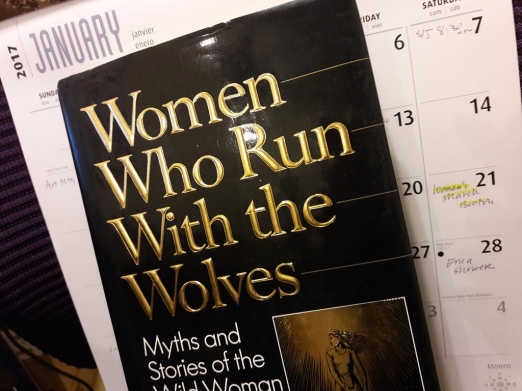 RM Allen is the author of The New Hampshire Goddess Chronicles series, small but effective books on the intersection of spirituality & environmentalism. She continues the small but effective theme in her newest writing project: the Maryvonne Mini-Mystery series, which tell a more inclusive history of New Hampshire: Incident at Exeter Tavern. Incident at Ioka, Incident at Exeter Depot and Yuletide at Exeter. All profits donated. Available at Amazon/Kindle or Water Street Bookstore. Thanks for your support! View more posts